I'll have you know that my baby kicked her cold's bum-bum because she is....
SUPER NOEY!!! 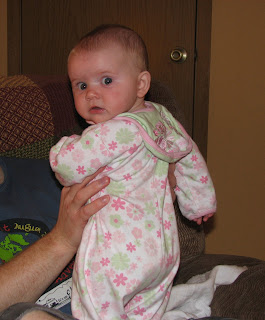 Once Maya actually came down with a cold, and Naomi and I immediately caught it, it's almost like...like I could relax. I mean, I get so afraid that the kids or my husband or I will get sick that I spend all my time thinking about it, but now that we actually got effing sick, I could stop most of the all-consuming anxiety. (Athough, for the duration of the cold, the anxiety is contained to worrying about Naomi choking on mucous in the night--that fear doesn't just go away.)

I'll tell you a story. Awhile back, when Naomi was only about a month old, I caught a cold. A really bad, lingering one. It started with a terrible sore throat, and progressed to a snotty runny nose and a terrible cough. I was in full blown panic mode. Definitely Code Red. I mean, we are talking none more red. 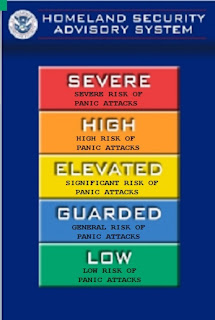 I was so afraid of getting my tiny baby sick, that I wore a mask. WORE A FUCKING FACE MASK, for more than a week and a half. And not just the flimsy-paper doctor kind of mask, but the full-on N95-1860 particle respirator, which--

"...meets both OSHA requirements and CDC guidelines for TB exposure control. The model 1860 may be used during laser surgery, electrocautery, and other procedures involving powered medical instruments. Intended to help reduce wearer exposure to airborne particles in a size range of 0.1 to > 10.0 microns generated during these procedures. Fluid resistant to provide .99% BFE against microorganisms and help reduce potential contamination and exposure of the wearer to the spray, spatter, and aerosol of blood and body fluids.inst micron-size particles. CDC recommended to protect against avian and swine flu." 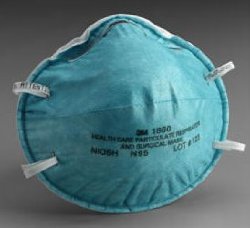 You know, the ones I bought when I was certain everyone was going to die dead of H1N1?

Anyway, when I caught that first cold, I wore it every time I fed the baby or held her or leaned over her to change her diaper, and after that first week and a half, I let myself take it off but still held it briefly over my face every time I had to cough. (The cough lingered.) And it was really fucking annoying. It's hard to breathe through those things. They are THICK. Pray to the Patron Saint of Effluvia that we don't ever have to wear them to protect against Zombie Flu or something. 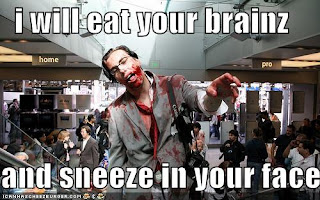 Not only did I wear a mask, but my husband slept in the baby's room with her, instead of having her in the bassinet in our room next to me. I had to go like two precious weeks without kissing her. And I was fanatical about washing. I mean more than usual. If I touched my nose, I washed. If I ate and my hands touched my mouth, I washed. If I breathed, I washed. If I coughed into my elbow, I'd go take a hydrochloric acid bath. You get the point. I was living in terror. But, my efforts paid off. My tiny newborn did not catch my cold.

So now that we're past that fiasco, and Naomi did catch this new cold? While it broke my heart seeing her too sniffly to even suck her binky, and seeing her mouth-breathing like a jerk, I just kind of let go of some of the stress. Because what's done is done--we caught it. We got sick. I didn't have to try anymore to have her not get THIS cold. 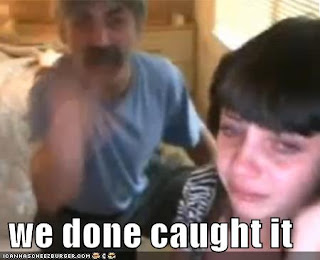 I caught it, but she caught it too, so I didn't have to go around wearing a gas mask and a HazMat suit and spritzing bleach about.

But seriously, doesn't this poor sick baby break your heart? 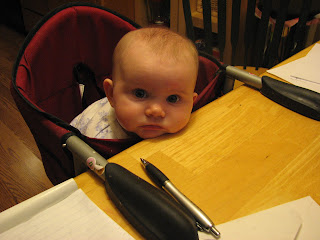 Being sick sucks. Having sick babies sucks. But this cold, we couldn't avoid.
Doesn't mean I'm not going to go into full gas-mask and HazMat mode when there's a Zombie Flu outbreak.
Posted by Jo at 1:16 PM

Email ThisBlogThis!Share to TwitterShare to FacebookShare to Pinterest
Labels: and the consequences will never be the same, colds, ms paint, none more red, patron saints, sick like the dog, super noey, zombie flu