101 Ways for an OCDer to Enjoy a State Fair.

So after my poor tot woke up sick, saying she had a tickle in her throat, she spent the early morning coughing and sneezing right and left, with a runny nose. This went on for like two hours, and then, voila, gone. We wondered, "Was this Sudden Onset Allergies?" It was weird. She seemed all better.

So after a very rough start to the day, when she seemed totally back to normal, we carried out our original plan of going to the fair!

...Another great choice for a mom with OCD. Why do I do this to myself? I get all KINDS of great ideas, don't I?

So we loaded up and went to the Evergreen State Fair. I've always loved the fair, LOVED it. Even just a few years ago, but that was before we had kids. (Because when I am responsible for only myself, I know that I'm not going to put my filthy hands in my mouth, or suck on the armrest of a ride, or drop my corndog and then eat it anyway.)

Anyway, we got there and the first thing we did was have a deep-fried Oreo or two. Because I'm health-conscious like that. Then we took Maya on the carousel. Well, my husband did, because that was how we spent the day--splitting up to take Maya on rides or go on one ourselves, while the other held down the fort with the baby. Sucks that when you have tiny kids, you and your mate can't go on rides together, but oh well.


MY CUTE KID, LOOK AT HER 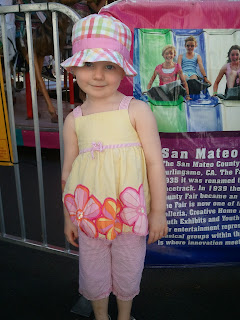 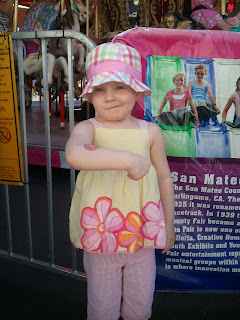 And just so Naomi doesn't sue me for emotional neglect later in life, a picture of my other darling: 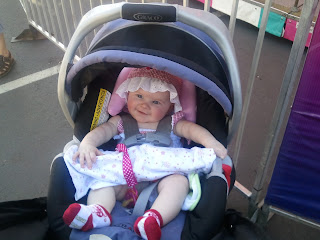 (I had wrapped the carseat/stroller buckle in a blanket, because when it's unbuckled, it drags on the ground. And I didn't want her touching it. More OCD Tips 'n Trix brought to you by Jo.)

My first ride was that one where you lay belly down and you go up and down around in a circle, like you're some kind of Superman. Exciting; thrilling; GERMS. You kind of had to rest your chin on the...chin rest, and grab the bar below you, but I'll have you know I did neither. I arched my back so that no chin germs would sully my person. Anyway, the ride, with modifications, was funnish. Except that, I had to take my flip-flops off before the ride started, and as I flew round and round like an enhanced Clark Kent, I saw pile after pile of human vomit on the cement below. And when the ride stopped, I had to tiptoe back to my flip-flops, trying desperately to avoid the omnipresent piles-o-puke. So that kinda sucked. Or blew, rather.

Then after that, I went on one of those thingers that takes you up into the stratosphere and drops you. You know, one of these guys:

It was a blast, but of course, 90% of what I was thinking was, "OFUX THE GERMS ON THE HANDLES." Then 9% of me was thinking, "Dear sweet baby Jesus don't let me die." One percent of me had a blast.

At some point we foraged for food, and I had some fairly tasty nachos supreme. First I wiped my hands with two alcohol-based Sani-Hands wipes, then I followed it with a jigger of hand sani gel. I also wiped off the packets of hot sauce with Sani wipes. Then as I ate the beans, I couldn't help but think of how refried beans are a major source of food poisoning. Eh, a little of the old Clostridium perfringens never hurt anyone. Er, or something. Anyway, the nachos were yummy. And I'll keep you updated on the next 24-48 hours.

The baby was hungry, so I re-sanitized my hands 29837493 times, then prepared a bottle and fed the child. She also kept swinging her hands about and once actually touched the abhorrent table. I tried not to cry. And every time I held her (after using hand-sani, of course), I still felt like I was contaminating her. Like her legs and arms and bottom were germed out to the max because I touched her with filthy fair-hands.

Contaminating. That's a very accurate word. I feel contaminated every time I go anywhere or touch anything. And I feel contaminated BY my sick 3-year-old. When she's sick, I feel like she's poison. Every time she sneezed, I was like, "OMG SNEEZE INTO YOUR ELBOW!!" and every time she rubbed her nose I was like, "DO NOT TOUCH YOUR NOSE!!" That's just sad and miserable. I don't want to feel this way, certainly not about my own kid. But I do.

Anyway. After that it was time to walk through some of the exhibits, and I cringed at all the food samples where passersby hand-dipped pretzels into flavored oils and dips. But I put on my big-girl panties and the put my OCD in time-out so I could sample some salsa on a chip (I was able to do this because the vendor himself was spooning out the salsa onto a plate, and there was no dippage involved), and I ended up buying some. (It's a big old canister of dry salsa ingredients, and you mix it with diced tomatoes, FTW. Sooo yummy.)

I also bought a monkey-sock hat for Maya, but I will either wash it on hot first or put it in the freezer for awhile to ensure that it does not give us lice from all the kids that tried it on before we bought it. What, I didn't tell you that I have a massive fear of lice as well as germs? Let's save that for another time, shall we? 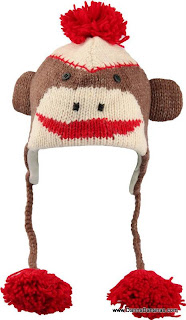 Sidenote: It must have been "Show Your Classy Upbringing" day at the Evergreen State Fair today, since 90% of the people were walking around wearing obscene slogan T-shirts. One such classy lady's shirt read, "I have the PUSSY, so I make the RULES." Niiiiice. I'd like to break me off a piece of THAT. 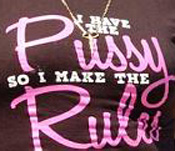 OK, so after perusing the exhibits, we ventured through the animal barns. We saw some gorgeous cows, sheep, pigs, and pygmy goats (which I call unicorns--don't ask). The stench was phenomenal, but the animals really were lovely. I asked Maya what one of the plain pink pigs was named, and she said "Hoinky." I asked her about the black pig. He was named Boinky. The spotted one? Noinky. 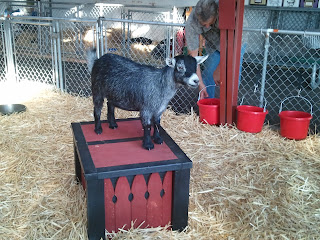 He's all, "TOTALLY SIDE-EYEING YOU"

We also saw a cow named Beyonce, and for some reason this upcracked me so very deeply. You'll have to click to enlarge the photo to see her name: 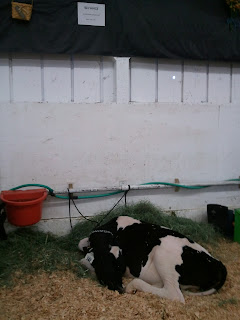 Beyonce was having a bit of a lie-down. But she really was Udder-licious.

After the animal barn, it was time for another round of the screamy-droppy Big Shot thingy ride, more carousel, and a terror-filled ride on the Tilt-a-Whirl (I'm sorry, Maya, I thought you'd like it). Then it was time to head home.

We were disastrously dirty. I had worn flip-flops, and Maya wore sandals, and our feet were none more black. 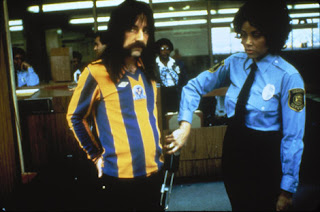 (Wait, they really DO call it that. I thought I was making it up. Christ.) 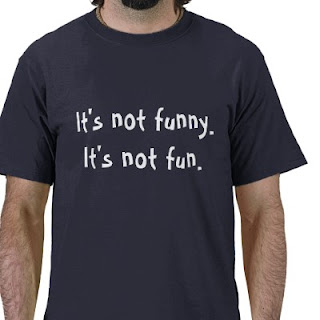 And there are no "just accidents" on Hwy 2. If there is an accident, it's a fatality. :( I mean, it's a twisty, two-lane road with no middle divider, where people go 75 mph. Hwy 2 has been listed as one of America's most dangerous highways.

So I sit there, in the passenger seat, fingernails digging into my palms, saying a prayer to the Patron Saint of Hwy 2 (just kidding, seriously praying to the actual Jesus H. Christ), that we don't die in a head-on collision. And with the baby SCREAMING the whole way? Good times.

For this here OCDer, getting home is one of the most stressful parts about going anywhere. Because when we get home, we have to prioritize and figure out what the hell to clean first, where to start. Bottles, binkies, hands, our very bodies, where to begin? It's so much worse when I'm alone, too, and have to do it all by myself.

And we were filthy. Our feet, our clothes, our hands, our arms and legs. So I Clorox-wiped my feet (I love that you think I'm kidding), the carried Maya into the shower where we cleansed our persons. We washed like white demons. 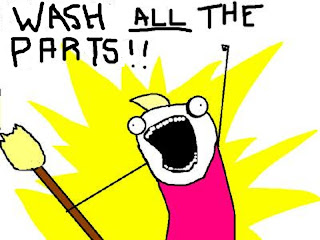 And the feet got washed twice.

We were hoping to be able to leave Naomi in her carseat (inside the house) while my husband showered, but she was screaming so ridiculously that instead, he just stripped off his dusty dirty clothes and fed her a got-damn bottle. By the time she was done, so were Maya and I in the shower. I changed the baby's clothes and put her to bed while my husband showered. Then I washed the hell out of Noey's bottles and binky, and Cloroxed off the canister of salsa we'd bought.

Oh, and then I bleached the shit out of the shower.

Also? Because we are such awesome people and parents? We realized that Maya was actually still sick. She had done a good 180 earlier in the morning, and we thought she was just a wunderkind who had fought off her cold in mere hours, but really, turns out she was still sick. So I'm sorry, everyone at the Evergreen State Fair. But it serves you right--it's not like YOU stay home when you are sick, either, you bastiges.

My poor sweet sicky, just after her scouring shower. Look at those sad, sick, tired eyes. :( 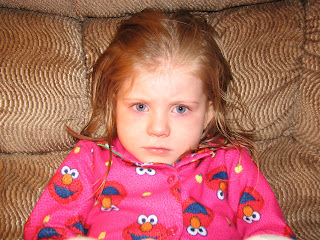 It was a full, busy, fun, intensely OCD day. I mean, I guess we had fun, but these are the things that run through my head when we're out and about, trying to have a fun family day at the fair. Filth. Vomit. Colds. Flu. Food poisoning. Lice. Beyonce. But it's not my fault. I still try to have fun, but this is what fun is like for a person with OCD.

Anyway, maybe my next brilliant idea will be to take my kid to the ball-pit at the local play place. :/
Posted by Jo at 2:57 PM