Speaking of hotels, I gotta tell ya, I learned something this day. A new technique, if you will.

Howie Mandel, my kindred spirit and fellow OCDer, doesn't bother wearing shoes the entire time in a hotel, like I do. In a John Tesh interview, he explained that he orders a couple dozen extra towels and creates a path, a towel stairway to his own personal OCD heaven, and tells the maids not to disturb them. (I go a step further and forgo all maid service entirely, lest they destroy the cleanliness I've wrought.) He even puts towels down in the shower to as not to have to step upon the actual tub or tile.

I never thought of creating a towel path in the entire hotel room (although I'm not sure why, since I do cover the whole floor of the bathroom with towels). Next time, assuming I'm ever brave enough to enter a filthy sex lair hotel room again, I might just have to go this route. 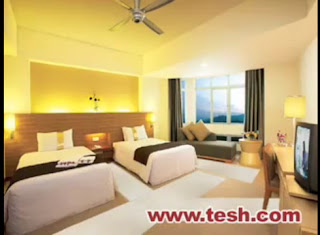 Email ThisBlogThis!Share to TwitterShare to FacebookShare to Pinterest
Labels: fistbumps, hotels, howie mandel, look at all the fucks