I Can Laugh About It Now...Right? 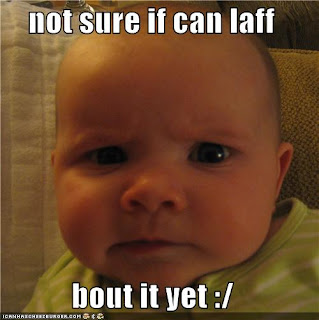 So my older daughter Maya had been struggling with a wee bit o' the old constipatoriality. OK she'd been blocked up. Her poops were getting less and less frequent, harder and harder, and more and more compacted (hey, you're at a blog called Poop on a Hot Tin Slide, you have to expect to read about poop sometimes). So when she'd finally go, they hurt her poor bum-bum so badly she'd cry. Then she'd be afraid to poop again next time, and she'd hold it in, and behold: the vicious cycle.

So after taking her to a doctor who checked out her bum-bum and related regions, I began using the age-appropriate amount of Milk of Magnesia for her, at least just to get things started, because let me tell you, when I was blocked up after giving birth to Naomi, Milk of Magnesia was my savior. I had not pooped in almost a week and a half, so I've never been so thrilled for my ass to act a sprinkler. Bum-bum pee. The squirts. The trots. Captain Trips. Oh I was in heaven. It was beautiful. Thank you, Patron Saint of Compacted Stool.

(I should mention here: The ADULT dose of Milk of Magnesia is 2-4 TBSP (tablespoons). I started with the minimum dose, a mere 2 TBSP, and very soon after had epic, epic shits, as heretofore mentioned. I don't even want to think of what additional TBSPs would do to a person. Wait. I might have an idea. Which brings us to the climax of this tale...)

For a week, I'd been giving her two tsp a day, to no avail. Still horrible, painful poops. So I finally upped her dose to three tsp. Still no real results.

I was always the one who gave her the meds. Then one fine morning, my husband took the initiative and gave Maya her daily morning dose of Milk of Magnesia. I had set the teaspoon that I use, right beside the bottle of medicine. However...well, I think you can smell where this is going.

Suddenly, at about 7 pm that night Maya started having out-of-this-world diarrhea. She has been fully potty-trained for a year and a half, but when we started giving her Milk of Magnesia, we had proactively put her in pull-ups, just in case, because I had no idea what even two teaspoons would do to her (since the MINIMUM adult dose, two TBSPs, made me crap out my soul).

So that night, suddenly she's shitting all over the place. All over. Every five minutes she's shitting her pull-up, after we've just gotten done cleaning up huge messes, and then it's another round of poo.

Finally, after the billionth epic diarrhea, my husband sheepishly asked me if the amount of medicine I usually give her is, and here I quote, "the third line on the medicine cup." (The dosage cap that comes on the bottle of Milk of Magnesia.) My jaw dropped.

The third line on the medicine cup is three TBSP. THREE TABLESPOONS. One entire tablespoon more than I took, as an adult who hadn't crapped in 10 days.

Let me put this in perspective. Thanks to Home Ec, I know that 3 tsp = 1 TBSP. So he effectively gave her NINE TEASPOONS, when the recommended dose for her age is 2-3 teaspooons. He gave her three tablespoons, when a mere two tablespoons liquefied MY innards.

I did not murder my husband that night, but legally, I'm pretty sure I had every right to. 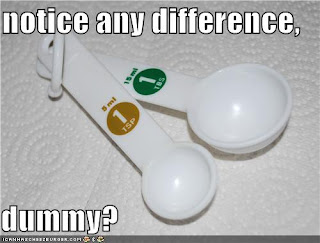 So that was a rough patch. Not only dealing with epic diarrhea everywhere and the germs that entailed (giving her shower after shower, trying to deal with a pull-up that's about to spill its contents, just everything about it)....but finally the ass-pee seemed to end, and poor, exhausted, terrified Maya eventually went to bed.


-----
CUT TO THE FOLLOWING EVENING,
20 GOT-DAMNED HOURS LATER.
The next night, the squirts had long since stopped, so I thought we were well into the clear. No more Milk of Magnesia had been given (obvi). Suddenly, as bedtime drew near, all at once I heard bloodcurdling screams coming from Maya's bedroom. I ran in and beheld the sight of a massacre. An ass massacre. An assacre.

*The Drawing Weasel is what Maya calls her four-foot-tall painting/drawing/art easel, the kind that stands up like a tripod. Quadpod. Whatever.

I had every right to go ballistic on my husband, but all I could manage was to go stone cold, break into brain sweats, swallow my vomit, say a quick prayer to the Patron Saint of Bum-Bum Germs, and extraordinarily loudly announce to that man that he himself would be cleaning up every square centimeter of this crime scene, that he would be solely responsible for its total and complete disinfection, that he would be washing the child, and that divorce papers would be served in the morning.

I was just in total shock. I mean, if the thought of bum-bum germs on the handle of a shopping cart make me seriously (seriously) panic, and if the fecal microbes on the tabletops at restaurants give me tremendous anxiety, what was I to do with diarrhea all over the carpet? With Actual Shit on the carpet?? The CARPET for sweet baby Jesus' sake! The light. light. light. beige. carpet. Diarrhea. Carpet. I considered killing it with fire, or running away and never coming back.

After my husband was done man-cleaning "cleaning," I went in there and re-cleaned. OCD-stylee. I'm p. sure I emptied an entire can of Lysol Garden Mist-Scented Spray. I sprayed it all over the Drawing Weasel. Then I sprayed it all over the Drawing Weasel again. Then, then, I SOAKED the carpet with it. I sprayed and sprayed, in small circles, over the area of doom, for tens of minutes, until the carpet was positively drenched with Lysol. Then I coughed, tried to swat away the oppressive fumes, and sat back in defeat, because what more could I do?

My worst nightmare. Bum-bum germs. Sprayed out my child like a tommy-gun, all over her bedroom. Every time she plays at her Drawing Weasel, I have to restrain the urge to say, "Let's go wash your feet, love." 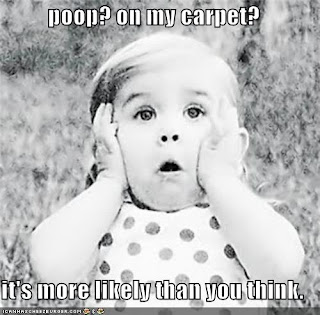 On that note, I'd like to end with a soliloquy from Maya that she gave the following day. I sat there, typing furiously, transcribing her oration word for word:

"Diarrhea is not funny. It is kind of bad poopies. It's liquid last time. Three tablespoons of diarrhea and one cup of Milk of Magnesia. Daddy gave me a little too much last time. Diarrhea is the thing that makes your bum bum hurt and makes your tummy really hurt. And it's liquid and it has water and poopy is just like water and water is just like--usually I wipe my own bum bum. Diarrhea is kind of not liquid and kind of yes liquid. And sometimes--I didn't toot. And if you drink not too much juice, not too much cocoa, and no bum bum medicine water, just drink water bottles, and not much water bottle parts, but usually you watch a show and you have to go pee pee and poo poo and sometimes Cheerios helps but not very much Cheerios and not very much fiber cereal, and I don't like milk, but I like water with no medicine in it, and usually I watch a show and then I feel like I have to go poopy. We can't eat very much peanut butter, right? Neosporin doesn't usually help your bum bum but you can use it for that. So we went to the doctor every minute ago, and the doctor fixed me, and it's liquid, kinda liquid, and sometimes it's diarrhea, and diarrhea does come out your bum bum. DIARRHEA!! The doctor put the stethoscope on my tummy to make sure how much my poopy doesn't come out. And she checked on my bum bum but it doesn't hurt, so she got gloves on her hands so she doesn't get bum bum germs on her hands. If there's germs on your hands from a bum bum, you better wear gloves and wash. And then throw them in the garbage. Then you eat fiber cereal. Fiber cereal comes out of your bum bum in a line, them a lump, then a line. And that's all about diarrhea. Can't talk about it."